I must admit it was curiosity that drove me to try Linda Bean's Lobster Cafe at the Portland International Jetport in South Portland, Maine. My husband and I had often passed her former location on Exchange Street in the Old Port, peering in through the windows, marveling at the sheer lack of customers. Never did see an actual diner in there.

Lo and behold, the Exchange Street location closed sometime last spring, and the LBLC reopened in the brand-spanking-new section of the PWM airport. Truly, as one of the Hungrygals, I felt it a moral imperative - not to mention a drive to satisfy my aforementioned curiosity - to give the LBLC a shot.

The menu is, as you can imagine, crustacean-heavy: lobster quesadillas, lobster roll, lobster salad and chilled lobster tail on a bed of greens, to name a few. Linda's also offers other fare, like burgers, sandwiches and soups, but hey, you can get that stuff anywhere! If you're gonna eat at the LBLC, you must have the lobster.

I ordered the lobster sliders, three mini-lobster rolls served on grilled, buttered rolls with a side of "kelpislaw" ($17.99). Now, cynic that I am, I expected the lobster to be dry or stringy, something that happens when lobster is frozen, even if only for a day or two; however, this was not the case. The LBLC must either use really, really fresh lobster, or they've perfected a way to freeze it without toughening the meat (since they sell live lobster right there on the premises, I presume it is the former). Each roll was stuffed with a generous portion of Maine's other-white-meat, juicy and tender, with just a tiny bit of mayo and a pickle on each sandwich. Deeeelicious!

The "kelpislaw" - which I noticed on the menu was a trademarked term - is a very light, sweet, vinegar-based cole slaw made with cabbage and yes, real Atlantic ocean kelp cut into thin strips. Although I'm a Mainer, I've only had dried kelp before, a salty, crunchy snack product that I didn't care for in the least. But this fresh kelp accented the cole slaw beautifully, lending a crisp and savory flavor to the sweet slaw. Outstanding. When I asked, the waitress told me the trademark was necessary because Linda Bean had plans to market and sell "kelpislaw" up in Freeport (perhaps she already is). If so, I'm buying!

Overall, the meal was excellent and I wolfed down every last speck of lobster and "kelpislaw" on the plate (although I did leave the last bun so as not to overstuff). Total bill, which included a diet soda on the side, came to $22.02. The waitress was prompt and very friendly.

Not sure what was going wrong at the Exchange Street location, but I'd be surprised if Linda Bean's Lobster Cafe doesn't become a huge hit at the jetport. Absolutely, unequivicably, two thumbs up for the LBLC!

Sorry, no doggie bag this time. Perhaps if I weren't leaving on a jet plane, I would've brought the furry 'gals some lobster (yeah, right). 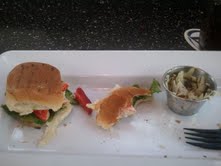 Posted by HungryGals at 7:55 PM No comments:

Been slacking a bit in food reviews. November's been a busy month, but the gals are back, chomping and chowing around town. We'll start back up with a review of the sumptuous buffet offered by The Saltwater Grille on Thanksgiving Day.
Reservations were required, as the SWG gets very busy for its holiday meals. We were seated immediately upon arrival - something I really appreciate because nothing annoys me more than having to wait for a table when you have reservations already. Just something wrong with that in my book! Anyway, a very friendly young waiter poured our water and offered to bring us drinks right away, another aspect of service I really appreciate. Then we proceeded to the buffet and dug in.

The food, for the most part, was spectacular. To begin, a starter table included steaming fish chowder, a ginormous bowl of peel & eat shrimp, complete with cocktail sauce and lemon, cheeses, lox & capers and rolls. Another table held salad fixings - ceasar and garden - and included sides such as marinated mushrooms, pickled beets and a curried carrot & cranberry salad that was to die for! Tried not to fill up too much on the appetizers, but it definitely required significant restraint.

The turkey and prime rib at the carving station were each succulent and cooked perfectly, still warm and juices flowing. Both were served with gravy. For sides, there was plenty to choose from: scalloped potatoes, pasta, carrots and beans and of course, stuffing - two kinds - the typical bread & giblet kind and then a cornbread & walnut offering. Both were delicious, although I was surprised the SWG didn't warn people ahead of time that walnuts were part of the dish, considering the prevalence of food allergies these days. Salmon was also available, tastily cooked in a light lemon and butter sauce.

Now, I'm typically leery about buffets, primarily because so often the food tends to get soggy and lukewarm, languishing in chafing dishes; however, this is not the case at the SWG. The busy and friendly staff kept the steamers full and rotated, which meant the food stayed hot and fresh.

Just two disappointments: the pasta, which appeared to be cream-based, was virtually tasteless, and noticeably missing were the mussels and tomatoes dish they served up last year (this is our second year at the SWG for Thanksgiving). But everything else on the buffet more than surpassed our expectations.

Since restaurants typically frown on doggie bags at buffets, we had some great fun in attempting to sneak out some turkey our furry Hungrygals, but we managed it. After all, it wouldn't be Thanksgiving without the whole family at the table!

The cost of the buffet per person was about $37, and the SWG adds an 18 percent tip on to the bill (a bit high, I think, since we primarily served ourselves, but we didn't mind. The servers need to be compensated for missing Thanksgiving with their families, after all). Two thumbs and two paws up for the SWG Thanksgiving buffet!