I don't typically gush over chain restaurants. Sure, I like Longhorn and I've been known to scarf down a few dishes of Carmelita's Chicken over at Romano's Macaroni Grill, but for the most part I love the thrill of discovering the creative fare of our local restaurants here in Portland. There's nothing like the heart and soul found in a hometown eatery, especially when local produce and meats dominate the menu. Yet, every once in a while, a chain comes along that blows me away.

The Red Robin, recently opened by the super Wal Mart and the Texas Roadhouse in Scarborough is just such a place. My introduction to Red Robin first occurred in Arizona on a trip to see the family. I'd heard of Red Robin before but only knew it as yet another in the endless multitudes of chain burger joints that dot the country (Krystal, White Castle, Burger King, MacDonald's, Wendy's, need I say more?). Frankly, I wasn't expecting much.

Boy, was I wrong! I ordererd the Chophouse burger, sans the onion straws (not a big fan of french fried onion rings on top of any sandwich), cole slaw and mac 'n' cheese on the side. The burger came with horseradish-sauteed mushrooms, melted swiss cheese and Red Robin's signature steak sauce on a soft onion and herb bulky roll.

WOW!! I couldn't believe my mouth (eyes, whatever)! The Chophouse burger truly did blow me away. The tangy steak sauce intermingled with the savory mushrooms and oozing swiss, complementing the perfectly-cooked medium-rare burger. The mac 'n' cheese, rich and creamy and cheesy, was made with spiral pasta. The cole slaw tasted fresh and crunchy and sparkled with flavor.

Reasonable, too - the total bill for a family of seven was about $75 bucks.

I instantly became a Red Robin fan. And I lamented the sad fact that we had no Red Robin's in Maine. Imagine my surprise when, upon my return, I discovered that a Red Robin had just opened in Scarborough! First I danced with glee, then decided I had to give it the acid test: would this Red Robin be as good as the Arizona Red Robin? Would there be consistency? Would I again be blown away?

The answer was a resounding yes.

I even signed up for Red Robin rewards.

Red Robin serves more than just burgers: there are salads, ribs, chicken sandwiches and a kiddie menu. The RR in Scarborough boasts a full bar serving local beers (a total plus!) and has an entire menu devoted to both adult and kid beverages alike.

Go. Eat. Enjoy. Do not be ashamed. 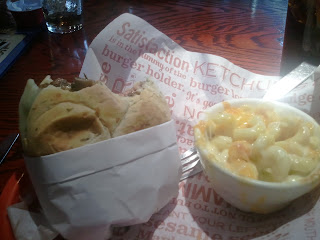