While I love Japanese food, I just can't stomach sushi. There. I said it. You will never see a review for raw fish in this blog. Now, don't get me wrong; I have nothing against sushi or sashimi at all. It's just that I grew up watching my grandmother elbow-deep in fish guts and slimy scales from cleaning my grandfather's catch, and those memories somehow invade my brain whenever the implausible thought of trying sushi crosses my mind.

Got that off my chest.

Yosaku, a Japanese restuarant and sushi bar located at the corner of Fore and Pleasant in Portland, offers a varied menu for all palates: bento lunch boxes, teppan grill, soups, tempura and of course the aforementioned sushi.

The day Hungrygals visited, we began with an order of the shrimp shumai - little round shrimp dumplings, steamed and served in a bamboo basket (see photo). Served with a side of ginger-soy dipping sauce, the shumai are little pieces of heaven. Shrimpy and softly firm, they melt in your mouth. A steal at $5.50.

For an entree, I ordered the Niku soup, a huge bowl of udon noodles and shredded beef served in a savory broth with a shaker of spice mix on the side. WOW! The noodles were cooked perfectly, al dente, and the meaty, tangy broth was robust with flavor. Perfect.

The other Hungrygal dined on the Scallops Teppan Grill. Over half a dozen seared scallops were served with rice, pickles and an abundance of grilled veggies. The scallops hinted of a light
teriyaki-ish sauce, and the vegetables (broccoli, asparagus, onion, mushroom) were crisp and tasty.

Yosaku's service is attentive, quick, friendly and accommodating. We felt welcome there. Sadly, that's not the case with all restaurants.

The soup could have served two people easily, so the canine Hungrygals made out like bandits. They even scored a couple of scallops and some rice. Yeah. Definitely two paws up. 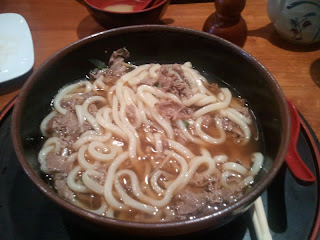 Posted by HungryGals at 8:40 AM No comments:

On the day of this review, we were in the mood for comfort food, but since it was sunny and springlike, we didn't necessary want anything heavy like beef stew or mounds of pasta. Had to find someplace that would offered a decent variety to choose from to help make up our minds, so we settled on Norm's Bar & Grill.

Norm's is located on Congress Street, almost directly across from the Post Office, so at times parking can be a challenge. We lucked out, though, and got a spot almost right in front of the restaurant.

Since we were early, we had our pick of tables and chose a booth near the window for people-watching. The waitress came over and got our drink order right away (always a plus). We also asked her for something that wasn't on the menu: a portabello mushroom appetizer, grilled and dressed in balsamic vinegar. It's a treat that Norm's used to serve years ago but is no longer available...unless you ask, because the kitchen was more than happy to accommodate us (see photo). A yummy start.

My hungrygals companion ordered the meat pie (lamb and beef combo) and I got the grilled Rachel, which is basically a Reuben made with turkey instead of corned beef.

The meat pie looked more like a calzone than a pie. Guess we were expecting something more like a chicken pot pie or something, but despite being a bit hard to eat - it looks like something you can eat with your hands but really a knife and fork worked best - the ground beef and lamb mixture was very good. Warm, juicy and seasoned well, it was served atop a salad with a side of rice.

The Rachel was delicious. Norm's uses REAL sliced turkey, the kind you get at Thanksgiving, not the uber-processed, sodium-bomb type from the deli. The sandwhich, served on rye, was stacked high with saurkraut and moist, tender turkey. A sucker for cabbage of all kinds, I asked for a side of cole slaw too, which was crispy and sweet.

The meat pie took a bit long to cook, but the waitress warned us of that up front. Our bill came to $34 without tip. The four-legged hungrygals missed out on the portabello (mushrooms are on the do-not-feed-your-dog list) but they did enjoy the leftover beef/lamb from the pie and turkey from the Rachel.
Two thumbs and two paws up for Norm's! 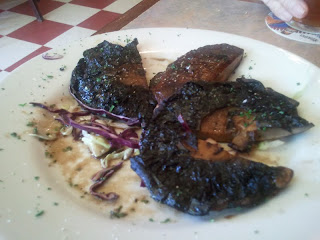 Posted by HungryGals at 1:03 PM No comments: